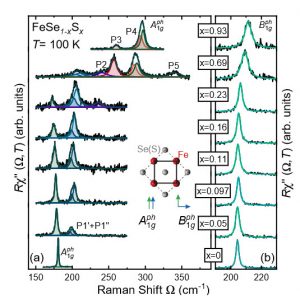 Phonon spectra of FeSe1−xSx measured at 100 K. We show xx and xy spectra where x and y are rotated by 45◦ with respect to 2 Fe unit cell, as indicated in the inset, and project A1g and B1g , respectively

Evolution of lattice, spin, and charge properties across the phase diagram of FeSe1−xSx

A Raman scattering study covering the entire substitution range of the FeSe1−xSx solid solution is presented. Data were taken as a function of sulfur concentration x for 0 ≤ x ≤ 1, of temperature and of scattering symmetry. All type of excitations including phonons, spins and charges are analyzed indetail. It is observed that the energy and width of iron-related B1g phonon mode vary continuously across the entire range of sulfur substitution. The A1g chalcogenide mode disappears above x =0.23 and reappears at a much higher energy for x = 0.69. In a similar way the spectral features appearing at finite doping in A1g symmetry vary discontinuously. The magnetic excitation centered at approximately 500 cm−1 disappears above x = 0.23 where the A1g lattice excitations exhibit a discontinuous change in energy. The low-energy mode associated with fluctuations displays maximal intensity at the nemato-structural transition and thus tracks the phase boundary. 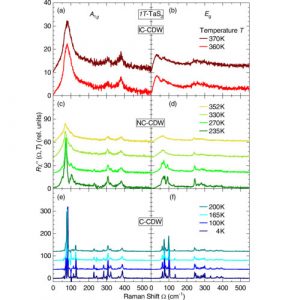 We present a polarization-resolved, high-resolution Raman scattering study of the three consecutive charge density wave (CDW) regimes in 1T−TaS2 single crystals, supported by ab initio calculations. Our analysis of the spectra within the low-temperature commensurate (C-CDW) regime shows P¯3 symmetry of the system, thus excluding the previously proposed triclinic stacking of the “star-of-David” structure, and promoting trigonal or hexagonal stacking instead. The spectra of the high-temperature incommensurate (IC-CDW) phase directly project the phonon density of states due to the breaking of the translational invariance, supplemented by sizable electron-phonon coupling. Between 200 and 352 K, our Raman spectra show contributions from both the IC-CDW and the C-CDW phases, indicating their coexistence in the so-called nearly commensurate (NC-CDW) phase. The temperature dependence of the symmetry-resolved Raman conductivity indicates the stepwise reduction of the density of states in the CDW phases, followed by a Mott transition within the C-CDW phase. We determine the size of the Mott gap to be Ωgap≈170–190 meV, and track its temperature dependence. 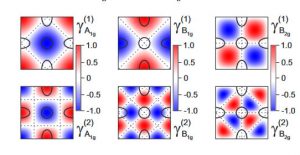 Symmetry properties and momentum dependences of the Raman vertices γμ. Shown are the first and second order vertices for polarization orientations transforming as μ=A1g, B1g and B2g for the D4h space group.

Inelastic scattering of visible light (Raman effect) offers a window into properties of correlated metals such as spin, electron and lattice dynamics as well as their mutual interactions. In this review we focus on electronic and spin excitations in Fe-based pnictides and chalcogenides in particular, but not exclusively superconductors. After a general introduction to the basic theory including the selection rules for the various scattering processes we provide an overview over the major results. In the superconducting state below the transition temperature Tc the pair-breaking effect can be observed, and the energy gap can be derived. The energies can be associated with the gaps and their anisotropy on the electron and hole bands. In spite of the similarities of the overall band structures the results are strongly dependent on the family and may even change qualitatively within one family. In some of the compounds strong collective modes appear below Tc. In Ba1-x  Kx Fe2 As2 , which has the most isotropic gap of all Fe-based superconductors, there are indications that these modes are exciton-like states appearing in the presence of a hierarchy of pairing tendencies. The strong in-gap modes observed in Co-doped NaFeAs are interpreted in terms of quadrupolar orbital excitations which become undamped in the superconducting state. The doping dependence of the scattering intensity in Ba(Fe1−xCox)2 As2 is associated with a nematic resonance above a quantum critical point and interpreted in terms of a critical enhancement at the maximal Tc.In the normal state the response from particle-hole excitations reflects the resistivity. In addition, there are contributions from presumably critical fluctuations in the energy range of kBT which can be compared to the elastic properties. Currently it is not settled whether the fluctuations observed by light scattering are related to spin or charge. Another controversy relates to possible two-magnon excitations,typically in the energy range of 0.5 eV. Whereas this response can also originate from charge excitations in most of the Fe-based compounds theory and experiment suggest that the excitations in the range 60 meV in FeSe are from localized spins in a nearly frustrated system. 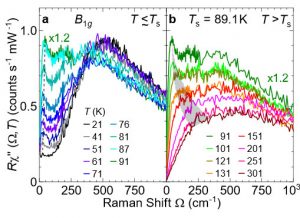 FeSe Raman spectra in B1g symmetry at temperatures a below and b above Ts = 89.1 K.

The charge and spin dynamics of the structurally simplest iron-based superconductor, FeSe, may hold the key to understanding the physics of high temperature superconductors in general. Unlike the iron pnictides, FeSe lacks long range magnetic order in spite of a similar structural transition around 90 K. Here, we report results of Raman scattering experiments as a function of temperature and polarization and simulations based on exact diagonalization of a frustrated spin model. Both experiment and theory find a persistent low energy peak close to 500 cm-1 in B1g symmetry, which softens slightly around 100 K, that we assign to spin excitations. By comparing with results from neutron scattering, this study provides evidence for nearly frustrated stripe order in FeSe. 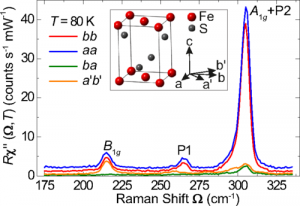 Raman spectra of FeS at T= 80K measured with light polarizations as indicated.

We present results from light scattering experiments on tetragonal FeS with the focus placed on lattice dynamics. We identify the Raman active A1g and B1g phonon modes, a second order scattering process involving two acoustic phonons, and contributions from potentially defect-induced scattering. The temperature dependence between 300 and 20 K of all observed phonon energies is governed by the lattice contraction. Below 20 K the phonon energies increase by 0.5-1 cm-1 thus indicating putative short range magnetic order. Along with the experiments we performed lattice-dynamical simulations and a symmetry analysis for the phonons and potential overtones and find good agreement with the experiments. In particular, we argue that the two-phonon excitation observed in a gap between the optical branches becomes observable due to significant electron-phonon interaction.